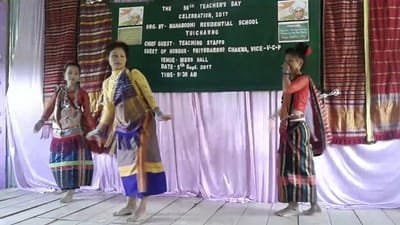 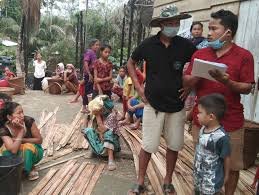 The Chakma women wear an ankle length cloth around the waist which is called a PINON. A PINON must have a SAABUGIH, which is an intricately designed pattern running across the length when worn, failing which the cloth cannot be called a PINON. They also drape a much more intricately designed cloth above the waist called a HAADI. The Chakma women also wear traditional silver ornaments.

Chakma women are excellent weavers and creative designers, who weave their own traditional dresses, using the Chakma traditional handloom called BEIN. The equipments that make up the chakma traditional handlooms is collectively known as SOZPODOR. Usually the chakma women design a number of intricate patterns on a piece of cloth which is called AALAM. This is subsequently used as a reference, and patterns from the AALAM are combined, mixed and matched to create beautiful designs on their traditional dresses.

Earlier the Chakmas would grow cotton in their jhums alongside rice, maize, fruits, spices and vegetables. A part of the cotton would be paid as taxes to the Chakma King who would then pay the cotton in tribute to the Mughal Emperor and later to the British Empire. British historians record that this cotton was of the finest quality. The Chakma women use the remaining cotton to weave their dresses. This cotton would be softened, made into yarn and dyed using traditional methods that use roots and herbs before being woven into beautifully designed clothes the Chakmas wear. However with the availability of pre-dyed yarn in the markets today, the Chakmas no longer make and dye their yarn except on rare occassions such as the Kathina Chivara Dana.
Food and Drinks

The Chakmas primarily eat rice as their staple food and except for a few, are non-vegetarians. They employ various traditional methods of cooking including GORAN (cooked slowly in a bamboo internodal tube on embers), PEBANG (cooked on leaves on red embers), PUJCHYA (roasted) and GUDIYE (cooked and ground in a bamboo internodal tube), HORBO (raw vegetables mixed in chilli paste). And integral part of the Chakma cuisine is the CIDOL, a pungent smelling paste prepared from fish and shrimps. Cidol is added to almost all vegetable dishes.

The Chakmas brew their traditional rice beer called HANJI and JOGORAH. This may further be distilled (sometimes twice called DWO-CHUNI) using traditional distillation methods and equipments to further purify the alcohol. Liquor is served during the BIJHU and special occassions.
Chakmas are extremely hospitable people and very often will go out of their way to delight their guests.
Main Festivals

The Chakmas celeberate many festivals, the most important of which is the BIJHU festival.

BIJHU
BIJHU is celebrated in the month of April and coincides with the Bengali New Year. BIJHU is celebrated for three days, PHOOL BIJHU, MOOL BIJHU and GOJYA-POJYA DIN. BIJHU bids farewell to the previous year and welcomes the new year. The Chakmas visit each other during the festival and wish each other good luck for the year ahead. The Chakmas serve a special dish on the occassion called PAAJON-TWON, which must be prepared from at least seven vegetable ingredients. Various kinds of rice cakes are also prepared. Rice beer is also prepared and served to the guests on the occassion.

BUDDHA PURNIMA
The Buddha Purnima is the most important religious festival of the Buddhists and commemorates the birth, enlightenment and Parinibbana of the Buddha. On this auspicious occassion the Chakmas gather at the temples and offer prayers and offerings to the monks and listen to Dhamma talks. At night they perform play(s) on the life of the Buddha. This is celebrated during the month of May.

KATHINA CHIVARA DANA
Celebrated in October-November this religious festival is unique to the Chakmas and is one of the most important. On this day a robe is prepared by the community from fresh cotton in a span of just 24 hours and offered to the chief monk (Bhikkhu) of the temple. The fresh cotton is threaded into yarn, dyed, woven and stiched to be ready before the sangha dana on the auspicious day. Women participate in large numbers and involve themselves in all activities of making the robe. In the evening paper baloons called PHENACH are set off into the sky. A play on the life of the Buddha is also performed afterwards.
Dance & Music

The Chakmas play a number of traditional games and sports, especially during the festivals. Both men and women participate in these games and often the men are pitted against the women in the games. Most are team sports such as GUDU-HARA, GHILE-HARA, PUTTI-HARA, POWR-HARA, DOLA-HARA, DUURI-TANA-TANI while some are individual games/sports such as BODA-BUDI, NHADENG-HARA, HUROH-JUDDHO and SARHA-HARA.
Some of the indoor games played are SHAMUK-HARA and BHOGK-HARA, which is also known as DOLA-HARA. In addition to the above games, the Chakma children also play a number of traditional children games such as HATTOL-TANA-TANI, HOBHA-JHANG and etc.
Weaving and Craftsmanship

A traditional Chakma House made of bamboo.The chakma men are excellent craftsmen, creating their items of everyday use mostly out of bamboos and sometimes from wood. Bamboo plays an extremely important role in the life of the Chakmas, without which their life would never be as coulourful. Bamboo pieces are sliced into thin long slices called BETH, which is made into a number of household objects including TOLOI (mat), BAREING, HALLWONG, AHRI (different types of baskets), MEZANG, HUROH-BAH, ODHOK, LUDHUNG and a lot more items. Traditional Chakma houses are also made almost entirely of bamboo.
Customary Laws
They Chakmas have their traditional customary laws for arbitrating social disagreements and adjudicating petty cases. A Karbari or the village headman usually adjudicates these cases. 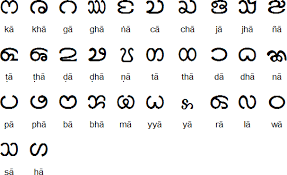 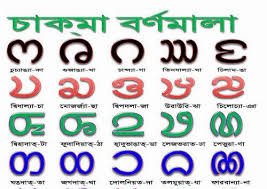 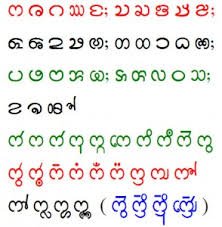 Language
The Chakmas have their own language known as Changma Bhajch or Changma Hodha. The language is tonal (not to be confused with intonations and inflections) and indeed many words are differentiated solely by their tones. This is in sharp contrast to the non-tonal nature of most Indo-Aryan languages in which many linguists tend to classify the Chakma language.

The Chakmas believe they originally spoke a language belonging to the Tibeto-Burman family. But centuries of contacts with the neighbouring Chittagonian population, the original Chakma language was heavily influenced by Chittagonian, a dialect of Bengali (a language belonging to the Eastern Indo-Aryan branch). Many linguists now consider the modern Chakma language a part of the Southeastern Bengali branch of Eastern Indo-Aryan language.
The Chakmas believe that the Chakma language contains strong evidences such as surviving original words and grammatical constructs which reveal the non Indo-Aryan origin of their language. Some progressive Chakmas have started efforts to document their original language and prevent it from further disintigration.

Scripts
The Chakmas write their Changma Bhajch in the Chakma script (an abugida, also known as Aujhapaat or Ojhapath). The Chakma script bears striking similarity to the Khmer and the Lanna(Chiangmai) characters, which was formerly in use in Cambodia, Laos, Thailand and southern parts of Burma. There are some amount of similarity between the modern Myanmar character set and the Chakma character set. The Chakma script was preserved by the BOIDYOS, the village medicine men, who used it to record a rich collection of medicinal plants, herbs and roots.
Unlike other writing systems of the Brahmic type, the inherent vowel in the Chakma script is the longer “ā”. This inherent vowel must be explicitly killed, which interestingly is also seen in the Dravidian scripts.  Although a variety of alphabetic conjuncts are possible, most conjuncts are not used. There also exists small amounts of regional variations in representing character symbols.

The Chakmas are simple and peace-loving people. Buddhist by religion, they live in Arunachal Pradesh, Assam, Tripura and Mizoram in India and Chittagong Hill Tracts in Bangladesh. They have their own way of life, language, values and culture. They were very highly educated and civilized but misfortune and adverse circumstances made them refugees in their own land.

The partition of India in 1947 was the main cause of the present suffering and problems of Chakma people. Being Buddhist, they wanted to merge with India at the time of partition but their homeland, Chittagong Hill Tracts – now in Bangladesh – was ceded to theocratic Pakistan against their will. That day marks the beginning of their struggle for life and survival.
The Chakmas became the victims of persecution, religious fanaticism and repression. Their arable land was flooded to build a dam – followed by the construction of a power plant – which left the Chakmas homeless, destitute and landless without nominal compensation or rehabilitation. In1964 about 30,000 Chakmas migrated to the then state of Assam – now Arunachal Pradesh – from East Pakistan – now Bangladesh – were they settled and started to rebuild their shattered lives. But after 30 years of peaceful living they found themselves again victims of discrimination.

Chakma people are at very high risk of loosing their cultural identity and values. We want to be by their side when they take up the challenge.
I BUILT MY SITE FOR FREE USING