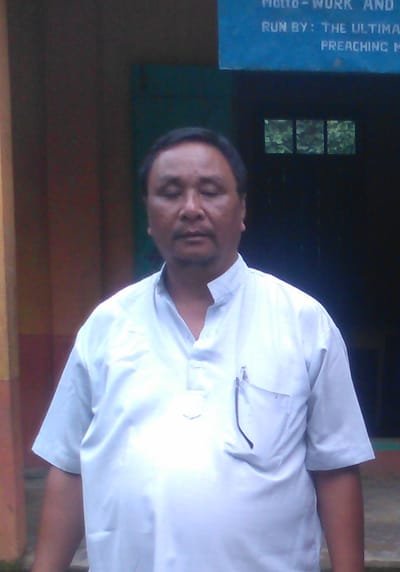 He passed High School Leaving Certificate Examination in 1978 He was the first H.S.L.C. passed boy in the Village. He joined Lunglei Gov’t College in August 1978 in 1styear PUc. But he had to stop further studies from june 1979 due to financial drawback of his parent.

Being back home, he choose to entrust himself in social work. He formed YOUNG CHAKMA ASSOCIATION, Branch at Tuichawng in 1979 and became the secretary of YCA branch. As a secretary, he undertook various welfare activities in the village. He proposed to established a Middle School in the Village. But, got no support from the then village leaders. In 1980, he joined in Diblibagh Private Middle School as Headmaster. He run the School at best he could. He obtained school opening permission and board recognition in the same year. He also formed Zonal Committee, YOUNG CHAKMA ASSOCIATION, at Diblibagh in 1981 and became the first YCA Zonal President. As a President, he worked hard to unite the local chakma people and under taken various developmental activities of the village.

In 1982, he got a job as typist-cum-LDC under Mizoram Gov’t in co-operative department. But, with the request of the village leaders of Diblibagh he didn’t join the job. In june, 1982, his father fallen seriously ill and became physically unsound, he had to come back home at Tuichawng to run his father’s business.

He joined the post of Primary teacher at Tuichawng gov’t Primary School w.e.f. 27th September 1983. Since then, he worked very hard for the upliftment of the people Tuichawng and neighbouring villages.

In 1989, he formed YOUNG CHAKMA ASSOCIATIONS’ ZONAL COMMITTEE at Tuichawng and became the first Zonal President. As a YCA President he worked hard for social reforms and development of the chakma people. In 1993, he became the secretary of Vihara Management Committee, Shanti Niketan Bouddha Vihara, Tuichawng. In 1994, he represented the annual conference of MIZORAM BUDDHIST ASSOCIATION. He was elected as the Vice President of Mizoram Buddhist Association in the conference. As a Vice President of MBA, he worked for the improvement of Chakma Buddhist Society. In 1995, he became the chairman of Shanti Niketan Bouddha Vihara, Management Committee. He undertook the renovation work of Shanti Niketan Bouddha Vihara, while working as a Chairman. He felt it necessary to form an ASSOCIATION/SOCIETY and got it registered under Firms & Societies Act 1971 under Mizoram Government to unite the chakma people with common goal and work for the welfare of chakma community in Mizoram. Hence, THE ULTIMATE TRUTH PREACHING MISSION, was formd in 1996 and got registered in 2000.

Email: President.utpm@gmail.com
I BUILT MY SITE FOR FREE USING